Tectonic plates are large segments of the Earth's crust that move slowly. Suppose that one such plate has an average speed of 4.0 cm/year. (a) What distance does it move in 1 s at this speed? (b) What is its speed in kilometers per million years? 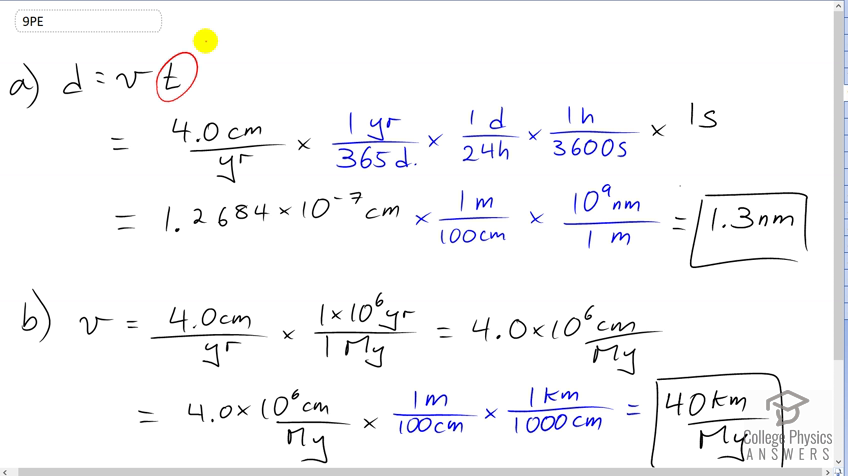 Video Transcript
This is College Physics Answers with Shaun Dychko. To find the distance that something travels you need to multiply it's speed by the amount of time it spends traveling. So we know that the Earth's tectonic plates are moving at 4.0 cm per year, and we're going to be multiplying this speed by a time in units of seconds. And so we need this speed to also have units of seconds on the bottom. And then our answer will end up having units of centimeters once we're done. So we need to multiply by these conversion factors in order to get rid of the years and end up with seconds on the bottom. So that those seconds in our speed will cancel with the seconds in the time that we're multiplying the speed by. So we have 4.0 centimeters per year, and there are 1 year in every 365 days, so that makes the years disappear and we're left with centimeters per day at this point, which is some progress towards our goal, but not quite where we want to be. We want to get all the way to seconds, so we're going to multiply by 1 day for every 24 hours, and then multiply by 1 hour for 3600 seconds. And then we're left with our speed converted into centimeters per second. And then we multiply centimeters per second by the 1 second, and we end up with 1.2684 times 10 to the minus 7 centimeters is this distance the tectonic plates move in one second, which is a very small number. Let's convert that to nanometers. And we'll multiply by 1 meter for every hundred centimeters and then we have another conversion factor 10 to the 9 nanometers for every 1 meter, making the meters cancel, and we're left with nanometers. And so our answer is 1.3 nanometers is the distance the Earth's tectonic plates move in 1 second, which is very little. And then our question is what is the speed of these tectonic plates in one million years. We could do centimeters per million years, but I'm going to convert this into kilometers per million years because it's easier to think about kilometers than it is to think about 4 point oh times 10 to the 6 centimeters. So a mega year, mega is the metric prefix for meaning million, we're going to have 1 times 10 to the six years in every mega year. And the years will cancel now and we're left with centimeters per million years. And then we'll convert the centimeters into meters by multiplying by 1 meter for every 100 centimeters (they're on opposite sides of the fraction there; that's why the centimeters cancel), and then there's one kilometer for every 1000 meters. And so the meters cancel leaving us with kilometers over million years. And that works out to 40 kilometers per million years. And strictly speaking, you know, based on the arithmetic here, you could write 4 point oh times 10 to the one kilometers per million years to emphasize that there are two significant figures in this answer since we had two significant figures in our number to start with, however, I'm quite skeptical it's possible to estimate with that level of precision over one million years. Seeing as the Earth's plates are being moved around by these, you know, magma that we don't quite fully understand anyway. Probably 40 kilometers per million years is a good answer.

same problem but the it's now 2.8 cm and 1.2 seconds and my online HW is teeling me it's wrong. Please help!!

Hello @eclipse34, could you tell me more about where you found the different numbers? I've looked at both the latest PDF of "College Physics" and "College Physics for AP Courses" and they have the numbers shown in the question above. Is there an online offering from OpenStax that you're looking at?

In reply to same by eclipse34

Hello @Pacman, could you tell me more about where you found the different numbers? I've looked at both the latest PDF of "College Physics" and "College Physics for AP Courses" and they have the numbers shown in the question above. Is there an online offering from OpenStax that you're looking at?