Skip to main content
Change the chapter
Question
(a) What is the best coefficient of performance for a heat pump that has a hot reservoir temperature of $50.0^\circ\textrm{C}$ and a cold reservoir temperature of $-20.0^\circ\textrm{C}$? (b) How much heat transfer occurs into the warm environment if $3.60 \times 10^7 \textrm{ J}$ of work ($10.0\textrm{ kW} \cdot \textrm{h}$) is put into it? (c) If the cost of this work input is $10.0 \textrm{ cents / kW} \cdot \textrm{h}$, how does its cost compare with the direct heat transfer achieved by burning natural gas at a cost of 85.0 cents per therm. (A therm is a common unit of energy for natural gas and equals $1.055 \times 10^8 \textrm{ J}$.)
Question by OpenStax is licensed under CC BY 4.0.
Final Answer
Solution Video 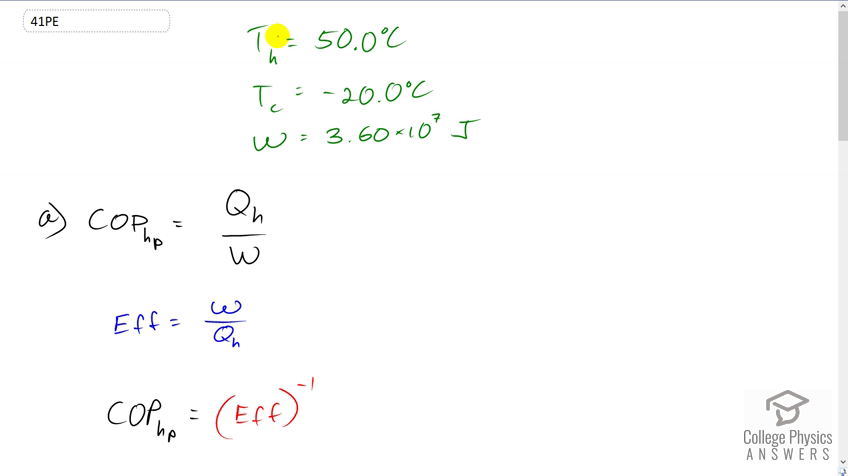 <i>This is College Physics Answers with Shaun Dychko.</i> A heat pump is pulling heat from a cold temperature reservoir of minus 20 degrees Celsius and delivering some heat to the hot temperature reservoir which is at 50 degrees Celsius. And the amount of work done for part B is 3.6 times 10 to the seven Joules. So the question is: "What is the best possible coefficient of performance for this heat pump?" Well, coefficient of performance for a heat pump is the amount of heat delivered to the high-temperature reservoir, divided by the amount of work needed to run the pump. So, efficiency is normally thought of as work divided by <i>Qh</i>, and we can see that the coefficient of performance for a heat pump is the reciprocal for efficiency. And so, we can replace <i>Qh</i> over <i>W</i> with efficiency to the power of negative one, cause exponent to the negative one makes the reciprocal. And then, we can replace efficiency with Carnot efficiency: the maximum theoretical efficiency that's possible. So that's one minus the cold reservoir temperature, divided by the hot temperature. And then, so, coefficient of performance for the heat pump, and we'll call it the Carnot coefficient of performance, is going to be this Carnot efficiency one minus <i>Tc over T</i>h to the negative one. So that's one minus, minus 20 degrees Celsius converted into Kelvin by adding 273.15, divided by 50 degrees Celsius, also converted into Kelvin, and then take that whole thing to the power of negative one. And that gives you coefficient of performance of 4.62. Now the part B asks: "Given a certain amount of work done or energy consumed by the heat pump electrical energy, what is the maximum amount of heat that could be delivered to the high-temperature reservoir?" So we take this maximum theoretical coefficient of performance and multiply it by <i>W</i> to get <i>Qh</i>, since we can solve for <i>Qh</i> here by multiplying both sides by <i>W</i>. So, <i>Qh</i> equals coefficient of performance times <i>W</i>. And so we have 4.6164 that we found in part A, times 3.6 times 10 to the seven Joules, which is 1.66 times 10 to the eight Joules, is the maximum amount of heat energy that can be delivered to the high-temperature reservoir by this heat pump. Now the cost for operating the heat pump compared to the cost of burning natural gas, what we have in the heat pump case, we have 3.6 times 10 to the seven Joules of energy consumed to deliver this much heat to the host, maybe, the high-temperature reservoir. So that's the amount of energy consumed, multiplied by 10 cents per kilowatt-hour for electricity, and we have to convert this into Joules. So we multiply by one hour for every 3600 seconds, and that makes kilowatt-seconds, and then we'll times by one kilowatt for every 1000 watts, and then that makes watt-seconds as our units in the denominator, and watt-seconds is Joules, because a watt is a Joule per second, and there we times it by seconds, so this makes Joules in the bottom. And this Joules will cancel this Joules, leaving us with cents, which I converted into dollars. So, it cost 1.00 dollars. Now, to get the same amount of heat delivered to the room with burning natural gas, we would have to burn gas to get this actual amount of heat. So with the heat pump, it's an order of magnitude less amount of energy consumed in order to get this much energy. But whereas with natural gas, you have to burn as much gas as heat energy that you want. So it's 1.6619 times 10 to the eight Joules, multiplied by the dollars per Joule, but we don't know what the dollars per Joule is, we know that 85 cents per therm, whatever that unit is. And we'll look up the conversion between that and Joules here. So it's one therm for every 1.055 times 10 to the eight Joules. And then, the therms cancel, and we're left with dollars. And it's one dollar and 34 cents to get the same energy by burning gas.