Skip to main content
Change the chapter
Question
An old microwave oven outputs only half the electric field it used to. How much longer does it take to cook things in this microwave oven?
Question by OpenStax is licensed under CC BY 4.0.
Final Answer 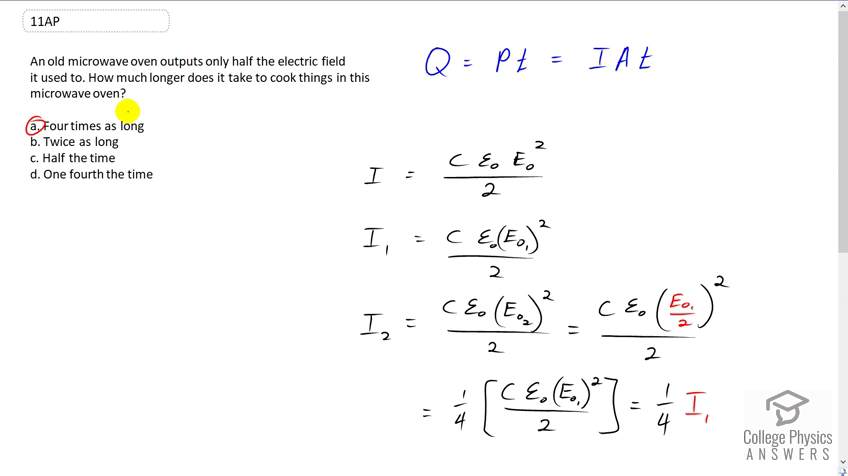 This is College Physics Answers with Shaun Dychko. An old microwave outputs only half the electric field strength that it used to. And so, how much longer does it take to cook things? Now, in order to cook things, it's gonna have to deposit a given amount of energy <i>Q</i> into the food. And that's gonna be equal to the power output multiplied by time, and the power is going to be the intensity of the microwaves multiplied by the area of the food that it's incident on multiplied by time. And so, we can create expressions for time here. Time will be the amount of heat energy needed to cook <i>Q</i> divided by intensity 1 times area. And then in the second case, after it becomes old, it becomes <i>Q</i> over intensity 2 times area. And the <i>Q</i> is the same in each case; it's the same food, it needs to get a certain amount of heat to be cooked, and the area is the same as well. And now, we can create expressions for intensity in terms of electric field because it is the speed of light times permittivity of free space times electric field strength squared divided by 2. And so, in the first case, the intensity when the microwave is new, is gonna be <i>c epsilon naught E naught 1 squared over 2</i>. And then, in the second case, it's gonna be the same formula but a new electric field strength, which is the original divided by 2. And we can see this makes a factor of 1 quarter in front of all of this <i>c epsilon naught E naught one squared over 2</i>, but this is the same as the original intensity. So the intensity after the microwave is old is gonna be 1 quarter what it was originally. And, so now when we're talking about the amount of time that it takes to cook food now, it's gonna be the amount of heat needed to cook, divided by intensity 2 times area. And we can substitute 1 quarter <i>I 1</i>, in place of <i>I 2</i> and multiply top and bottom by 4. And you get <i>4 Q over I 1 A</i>. And this is the original time when the microwave is new. And so now we see that it's -- after it's old, <i>t 2</i> the time is gonna be 4 times what it was when it was new. So the answer is A, 4 times as long.