Skip to main content
Advanced search
Question
(a) What is the minimum value of $l$ for a subshell that has 11 electrons in it? (b) If this subshell is in the $n = 5$ shell, what is the spectroscopic notation for this atom?
Question by OpenStax is licensed under CC BY 4.0.
Final Answer
Solution Video 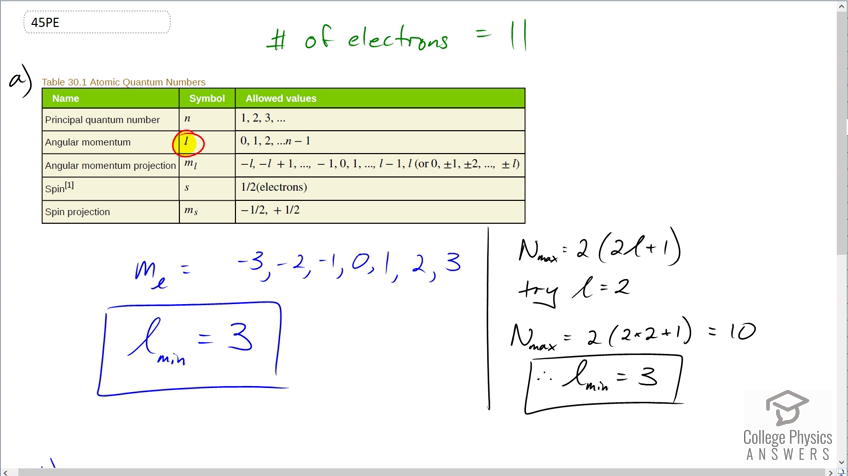 Start My Free Week
Trustpilot
Log in
View sample solution
Rating
Video Transcript
This is College Physics Answers with Shaun Dychko. Given 11 electrons, the question is what is the minimum angular momentum quantum number, l? Now there are a couple of ways to answer this question; one in black and one in blue. Let's try the one in blue first. Let's hypothetically come up with some value of l and we'll just test it out. Let's suppose l is 3; if that were true then the angular momentum projection quantum number can have values from negative l which is negative 3 and up by 1's until a maximum of l so negative 3, negative 2, negative 1, 0, 1, 2 and 3 and in each of these for each of these angular momentum projection quantum numbers, we can have 2 electrons; one with a spin up and another with a spin down state. And so this counts as 2, 4, 6, 8, 10, 12, 14 electrons can possibly fit in a state with l equal to 3. And so that would work because we need to have 11 electrons and if there's a maximum capacity of 14 then 11 would fit. And if you were to try l equal to 2 then that would make m l equal to negative 2, negative 1, 0, 1 or 2 which would give you 2, 4, 6, 8, 10 electrons; l equals 2 gives a capacity only for 10 electrons. So that doesn't work, that's not enough because we need to accommodate 11. Alternatively, you could answer this question using this formula which tells you the maximum number of electrons given a particular number for l and so with l equal to 2, you can say that 2 times 2 is 4 plus 1 is 5 times 2 is 10 so that's giving you the same answer we got by writing down the sequence for m l. And if you try so 10 doesn't work and so that means we have to try number 3 and if you plug 3 into here; 3 times 2 is 6 plus 1 is 7 times 2 is 14 and giving the same answer we have before. OK. So 2 different techniques for determining the number of possible electrons in a given subshell; subshells correspond to different values of l. Now in part (b), we want to figure out what is this state given in n equal to 5, what symbol should we have for the subshell and it's gonna be f. And we put a little 11 here to say how many electrons are actually in that subshell. So 5f 11 is the answer for part (b).

Solutions for problems in chapter 30